A year ago, I had no idea what a reader magnet was. In my literalness, I envisioned a nice refrigerator magnet with a picture of a book and a puppy. And maybe a kitten and a chicken for good measure. I don’t know about anybody else’s readers except mine – but we all like books, puppies, kittens, and chickens.

Then I stumbled across the idea of a “short story” that would give a reader a taste of the author’s brilliant writing. My first thought: Oh. That’s dreadful.

Case in point: I wrote a short story called Barter and Bargains three years ago and submitted it to millions of contests. (I typed jillions, but autocorrect frowns on exaggeration.) The maximum word count allowed was 5,000, so I had to trim my 7,500-word story back with a hatchet.

I learned four things from the experience:

I expanded my short story to a longer story that I learned could be called a novella. Another unfamiliar bookish word.

I still didn’t have a reader magnet, but I had a nice short novel about a nice donut shop. I called my novella Sweet Deal until someone pointed out all the romance books that were titled Sweet Deal.

Then I learned another word. Genre. Whatever it meant exactly, I wasn’t sure, but I was definitely positive I was not a romance genre type of writer.

After I published the novella, named Sweet Deal Sealed with the subtitle Novella, I marveled at the encouragement from readers for me to write another book about the Donut Lady. So I wrote Book 2, a longer book that is referred to as a novel, and the Donut Lady Mystery Series was born. Last summer, I published Book 3, another novel. Little did I know there is a magical rule in the Invisible Publishing Rule Book that says a series cannot have a novella as Book 1 if all the subsequent books in the series are novels. Fighting an invisible rule is not healthy for one’s sanity. Take my word for it.

Side note: Amazon has been absolutely amazing in their support as I’m going through the process of replacing the novella with a novel and eventually retiring the novella.

This is all well and good and an absolutely lengthy story that probably could use a murder right about now to help the plot move along. However, I still don’t have a reader magnet.

Do we leave our hero, Reader Magnet, lost in the maze of bookish words and invisible rules? Of course not! Reader Magnet hitches up her pants and begins her quest for her true identity.

While we’re waiting for the next installment of Reader Magnet, feel free to check out all my books on Amazon. Note: None of them are short stories or novellas except the scheduled-for-retirement one.

Why a Second Edition?

The first edition of SWEET DEAL SEALED is a novella – a short novel or a long short story. In the publishing world, there is a rule that says a series cannot have a novella as Book 1 unless all the rest of the books are also novellas. Who knew? Not me.

With DONUT LADY MYSTERY SERIES, BOOK 4 in the plans for 2020, it was time to channel my inner Don Quixote and pick my windmill/battles. Taking on the entire literary and publishing world to force them out of their antiquated rules didn’t seem fun. And I’m in it for the fun. I realized there was so much more to the Donut Lady’s earlier story. Who knew? And the EXPANDED SECOND EDITION was born. Now that was fun!

If you haven’t read the original novella, all of its story is included in the expanded second edition.

Are you interested in Book 4? Watch for it in the fall! 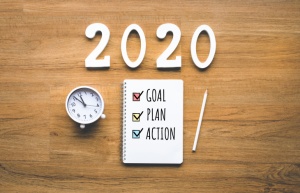 My Author Goal in 2018 was to publish a book. Results: I published two books.

My Author Goals for 2020: Publish four books, receive a prestigious award, sell one book through a bookstore, and end the year with a POSITIVE net income.

That last one – positive net income – is a stretch goal. At least I know the IRS is cheering me on! 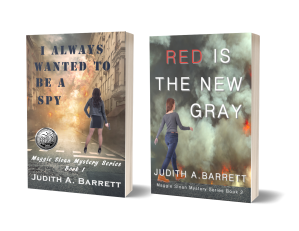 I’m struggling with whether I need to add a warning label or spoiler alert to the beginning of RED IS THE NEW GRAY, MAGGIE SLOAN MYSTERY SERIES, BOOK 2.

For anyone who has read  I ALWAYS WANTED TO BE A SPY, BOOK 1, you know about Maggie and her men and her heartbreak.

It is possible for a new reader to read RED IS THE NEW GRAY, BOOK 2, without having read BOOK 1 because the men and other characters from BOOK 1 are introduced.

HOWEVER, the dilemma is that BOOK 2 of course also mentions Maggie’s heartbreak from BOOK 1. THAT’S a spoiler! Do I add a warning label to the beginning of BOOK 2?

WARNING: DO NOT PROCEED WITH READING BOOK 2 UNTIL YOU HAVE READ BOOK 1. WE DON’T CARE IF BOOK 2 WAS FREE. GO READ BOOK 1. 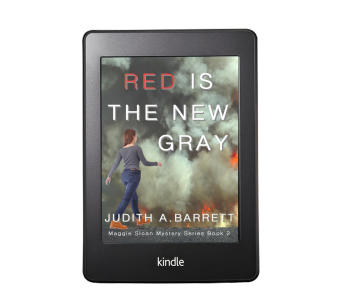 RED IS THE NEW GRAY

MAGGIE SLOAN – former librarian, self-trained spy, literal, and brilliant – has the skills of a deadly assassin. Our Gray Lady (like the Gray Man who blends in, except shorter) accepts a two-week assignment in Galveston, Texas, to find a missing spy who trusts only her. Larry, her original police officer protector and “cousin” from her hometown, is her backup.

The Gray Lady is rocking her new red boots as the fill-in cook at a diner, but before the end of her first week, she is shot. The attacks escalate and so does Maggie’s determination to solve the crimes. Note to bad guys: Maggie is irritated, and Larry and Maggie’s men are furious.

Maggie and Larry struggle with the disturbing clues that point to the guilt of everyone they meet. How many more people will die before Maggie uncovers the vicious leader who has escaped detection for so long? 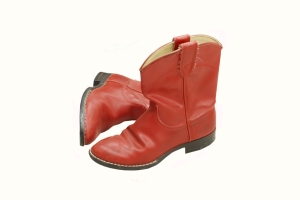 RED IS THE NEW GRAY Click/Tap to Buy on Amazon

Danger in the Clouds

I Always Wanted To Be A Spy 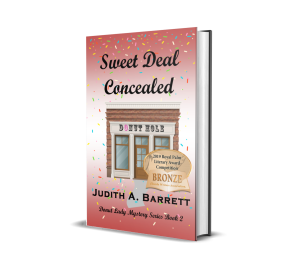 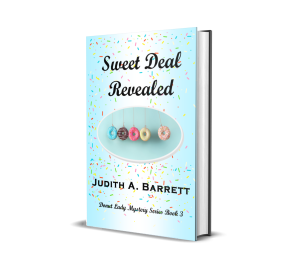 In 2019, I published four books and won three awards. Time to up my game.

Here’s a hack you won’t find anywhere else!

When you are at a school library in Georgia and you are discussing the differences in plants and trees between the Florida Everglades and South Georgia, NEVER dispute a second-grader. For example, coconut trees in Georgia? Pay attention to the seven-year-old expert.

Judith A. Barrett Books on Amazon

Are you ready for the free book in December that will help you check your survival skills?  What will you do when the power grid goes down? No internet, no social media, grocery stores run out of food in three days, gas pumps won’t work. End of the world as we know it.  How would you survive?

Note: My books are on Amazon. No surprise, but just letting you know as an Amazon Associate I earn from qualifying purchases.

DANGER IN THE CLOUDS is Survivalist Science Fiction with a touch of supernatural.

Major Dave Elliott’s quiet farm life abruptly changes after a cyber-attack takes down the US power grid. When the criminal conspiracy expands to target his family, Major goes on the attack.

DANGER IN THE CLOUDS on AMAZON

As soon as I had my table set up at the Bizarre Bazaar in Bainbridge, GA, my newest friend grabbed her DONUT LADY BOOK 1, Sweet Deal Sealed, before they were all gone. Note that I am a good inch taller than she is. She was at the booth around the corner from me with her amazing, talented husband and his beautiful woodwork. I love the new-to-me local festivals in south Georgia. I meet nice people and sell books.

There were some slightly bizarre happenings. I’m not going to tell you though because they all have a place in one of my books for 2020. I will tell you that I discovered the next murderer for DONUT LADY BOOK 4. One hint: the murderer is not pictured above. Unless she wants to be, then all bets are off.

Interested in knowing more about my current books? Here you go! Judith A. Barrett Author Page

This fall, FarmerMan and I are attending nearby fall festivals. We haul our books, tables, and tent and set up in a field or in a parking lot.  Our most recent fall festival was the Elevate Artisan Market hosted at an alpaca farm. Some people go to their local chain bookstore to sell and sign books. My hat’s off to them, but I suspect I met more people, sold more books, and had more fun at the alpaca farm. 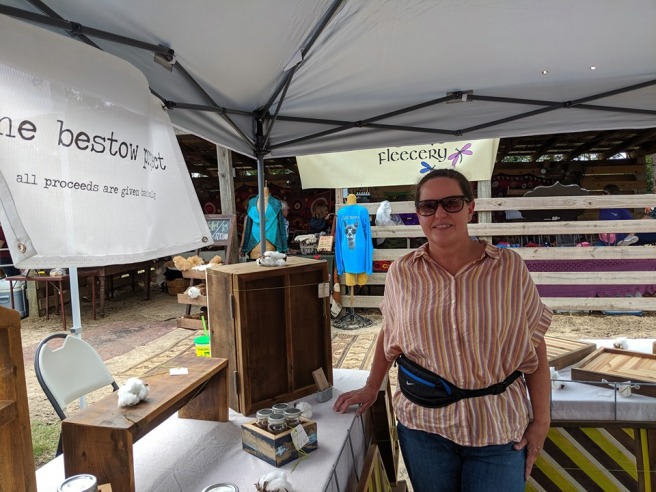 Notice that Donna Butler, a talented woodworker and carpenter, and my booth neighbor, is strategically placed across from the maisie daze fleecery.

I had a corner booth. One side of my tent faced the fleecery shop’s alpaca petting pen, and the other side overlooked a field of beautiful alpacas.

All the volunteers at the event wore T-shirts with the tagline, “Spit Happens.” Alpaca humor. A little known fact is that when an alpaca mama is giving birth, she is said to be “unpacking.”

The eNewsletter comes to you monthly in your email inbox.

As an Amazon Associate I earn from qualifying purchases.

My two basic rules for my approach on my self-publishing journey are 1.) Learn to do it myself; 2.) Use appropriate tools for those things that are too time-consuming for me to learn or perform myself. Every journey starts somewhere, and my publishing journey started with the willing heart of a complete novice. I’m sharing […]

Amazon DEEP Discount for the Paperback DANGER In The CLOUDS  GRID DOWN SURVIVAL SERIES, BOOK 1 Dystopian Science Fiction, Post-Apocalyptic Science Fiction, Suspense Thriller I might have reported this as a Leprechaun Sighting if I hadn’t heard the author-gossip of Amazon discounting a paperback with no notice. List price $16.99 Sale price $10.94 Savings $6.05 […]

See You on Social Media!